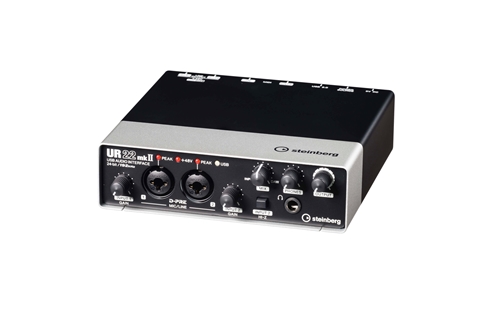 UR22mkII — leading in its class

Record and compose music in studio quality on your laptop or iPad with the UR22mkII. With outstanding audio and build quality for its price class, the UR22mkII combines choice components with advanced connectivity and flexible I/O options to offer a full-on mobile production platform.

The world is yours

Together with the included Cubase AI and Cubasis LE software, the UR22mkII audio and MIDI interface is a fully-fledged mobile recording studio. Offering easy and stable connection to PC or Mac computers, the MKII version now adds pro-level recording for iPad with the CC Mode and external power input. The UR22mkII offers total mobility, ultra-solid build quality and incredible sound characteristics for its price class, covering all aspects of recording and production in small studio environments as well as mobile production situations.

Integration you can rely on

When engineering the advanced driver architecture for the UR22mkII, our veteran team of audio and driver software developers created an I/O implementation that combines flexibility with stability. And because the drivers support the ASIO, Core Audio and WDM standards, owners of the UR22mkII are free to connect to all DAW applications available on the market today that support any of these widely accepted standards. Via the CC Mode, the UR22mkII also connects easily to your iPad, enabling a wide range of iOS audio apps to be used with it.

The included Cubase AI is a streamlined version of Steinberg’s world-famous Cubase production environment compatible with Windows and OS X. iPad owners can download Cubasis LE from the App Store for an exciting range of recording and mixing features optimized for touchscreen operation. Because Cubase can open Cubasis LE projects, you can capture musical ideas in Cubasis and transfer them to Cubase for further development, right up to full-on album productions. Quickly capture a melody when inspiration strikes on your iPad, sketch out a song on your PC laptop or MacBook and then transfer your project to a computer running Cubase in a full-blown studio to develop your musical creativity into a complete production, ready for mastering.

The UR22mkII turns your iPad into a full-on professional music production platform. Connect to your iPad with CC Mode using either the Camera Connection Kit or Lightning to USB Camera Adapter. The power input socket supplies your UR22mkII with the electrical voltage needed to run professional equipment such as condenser microphones requiring +48 V phantom power by letting you plug in a USB power adapter or a USB battery pack. And with the included Cubasis LE version for iOS, you can start recording and mixing straight away, with the option to upgrade to the full Cubasis version via in-app purchase.

With UR22mkII, you’re ready for a huge range of recording and production scenarios, even when you’re on the move. Record vocals, guitars and other audio equipment with up to two audio channels in pristine 24/192 quality while simultaneously recording MIDI signals. And you won’t have to carry it everywhere on a silk cushion; its sturdy construction and steel casing means the UR22mkII can withstand the rough and tumble of mobile music production. On tour, at home, on stage, or at your rehearsal space: take your UR22mkII with you wherever you need ultra-reliable recording and first-rate sound.

All UR audio interfaces offer D-PRE Class-A discrete mic preamps from Yamaha. The D-PRE is carefully designed to capture all the subtleties and expressiveness of any audio source and is the culmination of years of development by the experienced engineers at the Yamaha Corporation.

The preamp is where sound creation begins in recording, and ultimately determines the quality of your mix. D-PRE Mic Preamps sound stunning, and the difference is in the design. Usually, preamps use one transistor each for the hot and cold signals at the input stage to amplify the signal. However, the D-PREs specified on Steinberg audio interfaces use an inverted Darlington circuit, where two transistors are used for each hot and cold — a total of four per unit. With only one transistor on a preamp circuit, distortion tends to increase along with the signal level. By using a pair of two cascaded transistors, very low distortion can be maintained regardless of signal level.

Some users might look for a microphone preamp to dramatically color the sound while others search for a very neutral response. For example, some highly sought after vintage microphone preamps excel at amplifying certain components of a given source, imparting a generous amount of color to the signal. Such a preamp might be great for a vocal recording, however those preamps will not suit every use.

D-PRE has a very wide frequency range so that it can handle any music source and it does not overly amplify any specific components of the signal. It’s beautifully tuned to be able to capture the true expression of a given performance or audio source, while leaving flexibility for later editing. The end result is that D-PRE provides a sound that is a perfect amalgamation of understated signal enhancement combined with impeccable sonic integrity. The development team took a lot of time to adjust this subtle balance and the D-PRE sound quality speaks for itself.