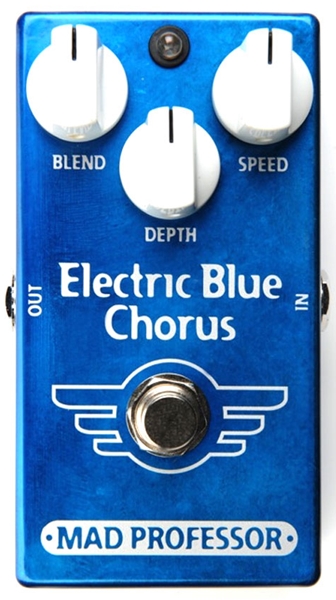 Chorus pedal even for people who do not like chorus.

Chorus effect is achieved by mixing dry signal with modulated signal (vibtatoed, delayed) making an effect of more than one instrument playing together same part.

Traditionally one would mix vibratoed and dry signal in equal portions to get the chorous effect, while this may lead to a metallic quality of sound.

With the EBC Blend knob you can adjust the mix of these two, and get lot of different tones, from mild to wild.

The EBC has musical modulation even with stronger Chorus settings, with tones leaning into kind of vibratoed tone that differes it from many other Chorus pedals.

With Depth and Blend knobs, one can also adjust very mild, barely audible Chorus sounds that add some dimension and depth to your tone.

EBC was designed to be used with both clean and distorted tone, and it works both in front of or after a distortion pedal..