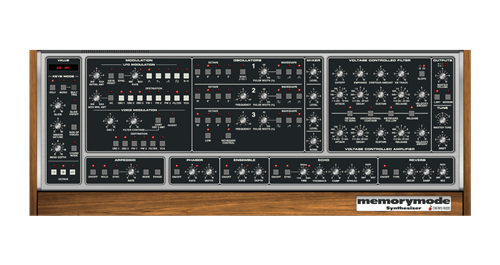 Memorymode is based upon one of the very best-sounding polyphonic programmable analog synthesizers of the 80s - the legendary Memorymoog synthesizer. Released in 1982, the Memorymoog raised the sonic bar with its lush, powerful analog sound. Memorymode was expertly modeled upon a vintage Memorymoog originally owned by jazz legend Chick Corea. It expands upon the original without compromising any of the sound or functionality that made it great, and does away with the reliability, maintenance, and tuning issues of the original. The user interface has been streamlined and simplified, updating the original instrument’s numeric-keypad-and-command-numbers with fast, simple-to-use pop-up menus and an improved value display window.

Memorymode replicates the incredible sound and feel of the original instrument at a tiny fraction of the cost of a vintage original, delivering all the power and musicality of the Memorymoog at a price anyone can afford.